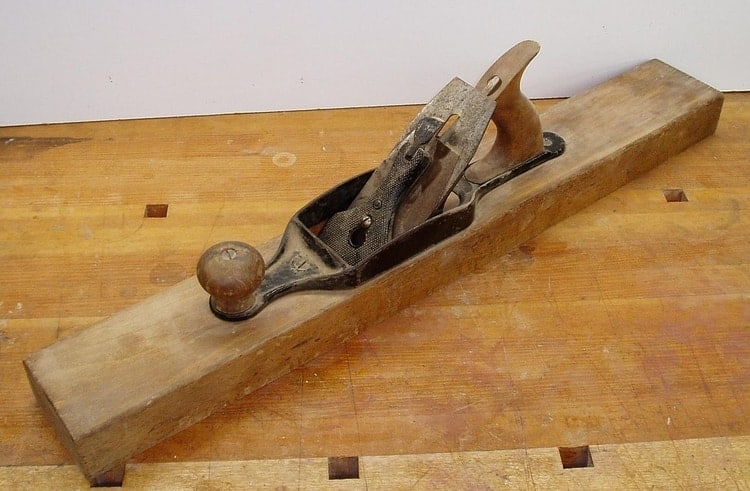 Like most basic woodworking tools, hand planes trace their history back to ancient times. Versions of planes with a wooden body were discovered in Roman excavations. A rudimentary form of a hand plane is believed to have been used by the ancient Egyptians.

However, since the early days, the fundamental design of the plane hasn’t changed much. It remains a solid block of material supporting a steel blade with a chamfered edge. The only difference today is that it mostly has a metallic body, whereas it was only made of wood in the past.

This plane is relatively small in the plane family, about 150 mm in length. It is meant for use with one hand. We usually use this one for trimming end grain and creating fine finishing cuts. The blade is seated at a lower level with the cutting bevel facing upwards. It results in a shallow cutting angle, which helps when you need to work on the end grain, to impart a fine, smooth finish. Variants of this type are pocket, apron and trimming planes.

As opposed to a block plane, the blade of the shoulder plane extends over the complete width of the plane. It provides a broader cutting edge.

We use this type of plane to cut rebates or rabbets. You can also use it to trim and cut and trim wood at corners. The flat side of the plane allows this to be done. You can get shoulder planes of different sizes to suit the kind of work you are doing.

Also known as rebate plane the rabbet plane is quite different from other types of planes. We use it to create rabbets in planks of wood. Similar to the shoulder plane, its blade extends over the full width of the plane body, wherein you can cut the flat side of the workpiece. However, unlike a shoulder plane, it is equipped with a fence. It keeps the cut perfectly parallel to the edge of the workpiece. The plane also has a depth stop which prevents the depth of the cut from being exceeded.

This plane is the “Jack of all trades” in the plane family, hence, its name. This plane is typically the start of any plane collection, and a popular size is the No. 5 Jack plane. We use the Jack plane for flattening and smoothing of boards. It is more or less a general-purpose plane in any workshop. The jack plane usually has a length of about 350 mm long, making it typically longer than smoothing planes and also relatively heavier.

Longer than a block plane at about 175 mm, the smoothing plane is still among the shorter members of the plane family. It comes under the category of bench planes, and we use it to do final finishing for flattening and smoothing boards. We only use a smoothing plane on a flat board. If sharpened and used with adequate skill, a smoothing plane can create a finish on wood finer than that of sanding.

These are the bigger and longer members of the plane family. A No. 8 jointer plane, for instance, measures about 600 mm in length. We use this plane to trim the sides of boards just before we join them. Due to its long sole, it is possible to use this plane for smoothing out the troughs and peaks on the surfaces of the boards to be joined. It helps to achieve a finer joint.

A bullnose plan is a shorter type of shoulder plane. We use a bullnose plane for adding finishing touches while working on tenons, and other types of fine work. Some models of bullnose planes feature a removable front, enabling you to convert them into a chisel plane. This way, you can work into the corners. The bullnose plane has a blade that is wider than its body to ensure that the body doesn’t bind against the wall of the rabbet. The result is that you get a straight, square, cut.

At first glance, a router plane looks like a cross between a spokeshave and a hand plane. We use this type of plane to clean out shallow mortises, grooves and dadoes. A router plane may sometimes come with a fence for straight work. You can get two cutting positions from the blade of this plane. The first is the board position. It features the blade being within the plane body. In the second position, the blade is exposed at the front. The second position allows you to cut right into corners.

A bit like a router plane, we use the plow plane to work on long grooves and dadoes. However, with the plow plane, the difference is it cuts grooves and dadoes in pieces of wood, rather than just cleaning them. For example, you can use plow planes for fitting drawer bottoms to drawers. Plow planes use an adjustable fence that uses the edge of the workpiece as a reference to ensure a parallel cut. A plow plane usually comes with a set of blades of different sizes which enables you to get grooves of different depths and widths.

The Japanese hand plane differs from all other varieties of planes in that it has a wooden body. The body holds a sharp, iron blade at an angle, just like all other types of planes. However, another big difference is that you pull the plane towards yourself instead of pushing it away. This movement is considered to give a far more accurate cut and to cause less fatigue. Another advantage is that the wooden body is less likely to cause damage to the workpiece than in the case of iron-bodied planes.

While some of the planes mentioned in this article differ only slightly from each other, many of them are unique and different. Each type of plane has its exclusive use. For the seasoned woodworker, it is essential to have an extensive set of planes. You may have a particular type of plane that you rarely use. But when a specific scenario presents itself, you may need that particular plane.

You may not require all the various planes mentioned in this list. However, if you are extensively involved in woodworking, a sizeable collection of planes is something that you need to have for a well-equipped woodworking setup.