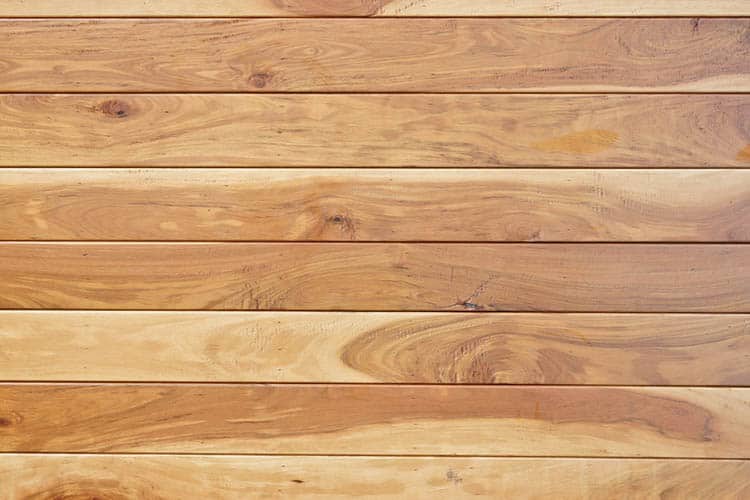 We regard teak as the king of woods because of its fine, intricate grain structure, attractive colors and hues, and sheer strength. Teak wood is also suitable for outdoor use because it has a natural resistance to moisture, rot, and insects. Teak is a popular type of wood, but the over-exploitation of this fine wood species makes it a scarce commodity.

It is prohibitively expensive and, in many countries, trading and use of teak are illegal. These problems leave us looking for other types of wood. Below, we look at some of the popular teak wood alternatives. While these are not exactly like teak, they do have characteristics including hardness, grain and finish that make them decent substitutes.

If you are ready to compromise a bit, you can find many alternatives to teak wood with similar properties but not nearly as expensive nor scarce. Although it isn’t the real thing, the types of wood we highlight here can take polish and stain, which will make it look as if they are teak. 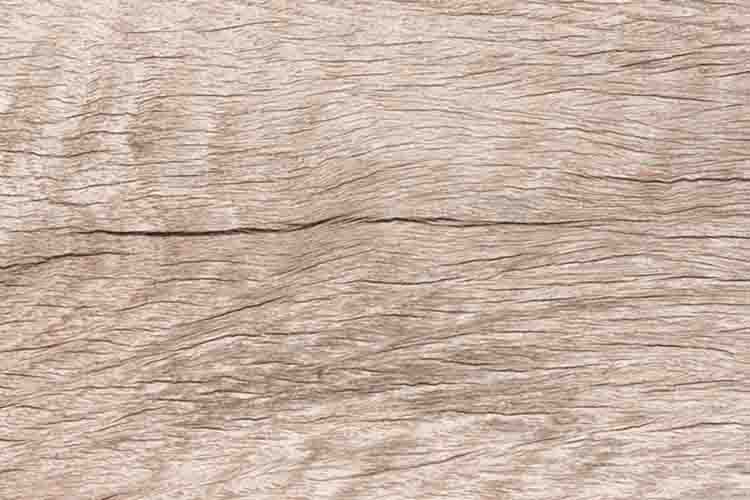 Shorea grows in the rainforests of Southeast Asia. This tropical hardwood bears many similarities with teak in heft and hardness and a similar density. The tight grain makes this wood suitable for detailed carving, and its high oil content renders it resistant to rot and insect attack. The color of Shorea is light golden when freshly cut, but the color fades to a silvery gray over time. It is more readily available than teak and a much cheaper alternative. 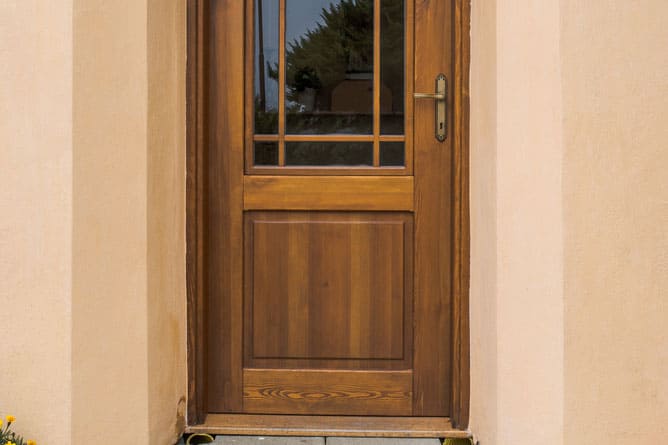 The other names for iroko are African teak and Kambala. It is a tough hardwood that comes from West Africa. Iroko also goes with the name “poor man’s teak” due to its low cost since it shares many properties including hardness, strength, and resistance. The trees grow to a height of 150 feet and their vast trunks can measure up to seven feet in diameter.

Iroko is not as flexible as teak but is good for use outdoors. The wood has a high mineral content, making it rough on cutting blades, but the problem can be resolved using suitable cutting tools. It has a different appearance than teak with a darker shade of brown but with paler sapwood. This wood costs about a third of the cost. 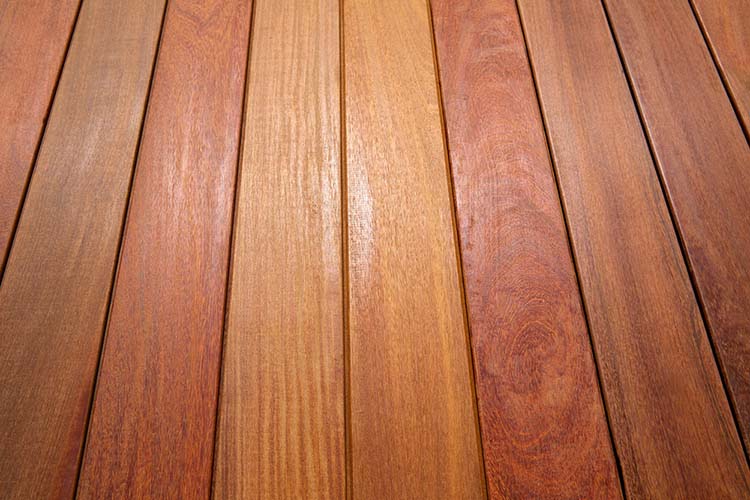 The common name for ipe is Brazilian walnut, and the lumber of this wood goes with the name of “ironwood” due to its incredible toughness. Ipe is denser than cedar three times and heavy enough to sink in water. The extreme hardness of ipe also exhibits a high degree of resistance to abrasion, dents, and scratches.

More advantages of ipe are that it is almost as flame-resistant as concrete or steel feels cool if touched even in the presence of heat. The hardness makes ipe a complicated wood to work with, especially if you want to carve it, and the wood is very oily, which makes it difficult to paint. The South American variety of ipe is not sustainable.

While these are the most common substitutes, other alternatives to teak include Mahogany and Bubinga, although there are serious concerns about their sustainability. Eucalyptus is another viable replacement for teak due to its durability and rot resistance, and it’s also more sustainable than the previous two species mentioned. If you want to avoid these and use a more locally sustainable option, in North America, treated maple can be an excellent outdoor substitute for teak. 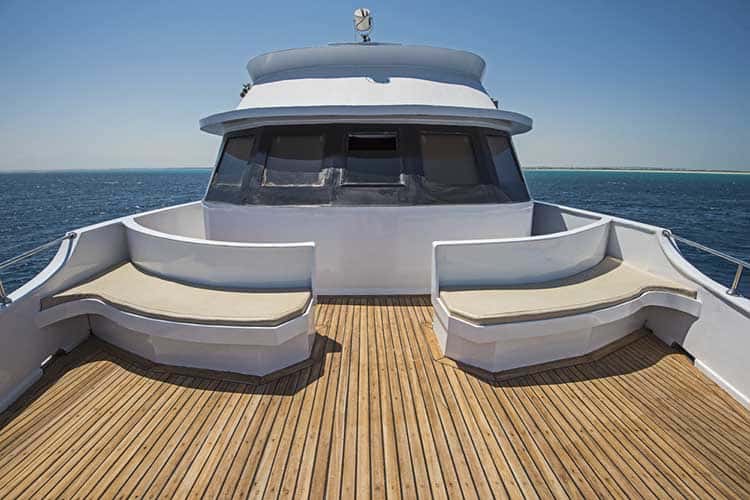 All varieties of engineered wood cannot be considered viable teak wood alternatives. However, a few types do come to mind, so saying thus, here they are:

A deck covering company in the UK, Treadmaster developed this variety of engineered wood which they call “Atalanteak.” It consists of a flexible film or sheet with a finish resembling teak. It is a thermoplastic material, and one form of this material is based on the composition of cork or rubber. This wood is useful for applying a teak-like non-slip covering for yacht decks.

A Norwegian company, Bolidt developed a material called Esthec, a teak substitute. It plays a vital role in providing protection and slips control to decks on yachts. According to the company, Esthec has the texture, feel, and appearance of teak, but it comes at a fraction of the cost, not restricted or restrained by the color of the wood or its shape of the grain.

Traditionally, the joints in between wooden planks on boat decks used to contain pitch. Today, with the help of Esthec, there is no limit to the possible shapes of planks. You can have highly-curved planking fitted tightly and made watertight. You can tint and stain planks made of Esthec to look like high-end woods like teak and mahogany.

Here’s another teak wood alternative from Norway in an engineered wood called Kebony. Kebony is wood-treated to increase its hardness and durability. Kebony isn’t a new variety of engineered wood and has been around since 1997. It evolved as a result of experiments carried out in an attempt to convert cheaper woods like pine and

During the ‘kebonisation‘ process, we treat timber planks chemicals for up to two days, then transfer them to chambers and heat them. The heating locks the chemicals into the cell structure of the planking and removes any excess liquid. The primary raw material of Kebony is sustainably harvested maple wood.

It exhibits a fine grain and a smooth texture. The fine grain of Kebony results in increased resistance to liquids in the event of spillages. The wood bonds itself with the cells of the wood. There are no chemicals involved, so there is no concern about toxins released into the environment. Although it shares many properties of teak, Kebony lacks the good looks and attractive color of teak. However, exposing this wood to the elements for a prolonged period begins to resemble teak.

How ideal are teak wood alternatives when subjected to the acid test? It is more of a psychological dilemma, and those who have to seem genuine teak for most of their lives will be averse to trying anything other than the real thing. But given the cost and sustainability issues, we think the alternatives highlighted here are worth trying on your next woodworking project.