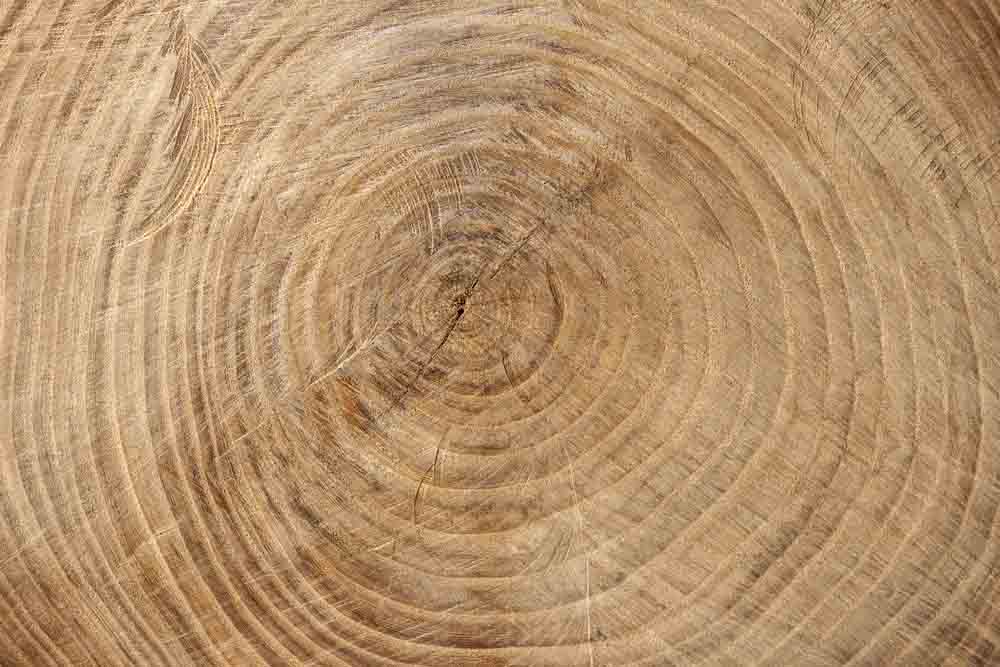 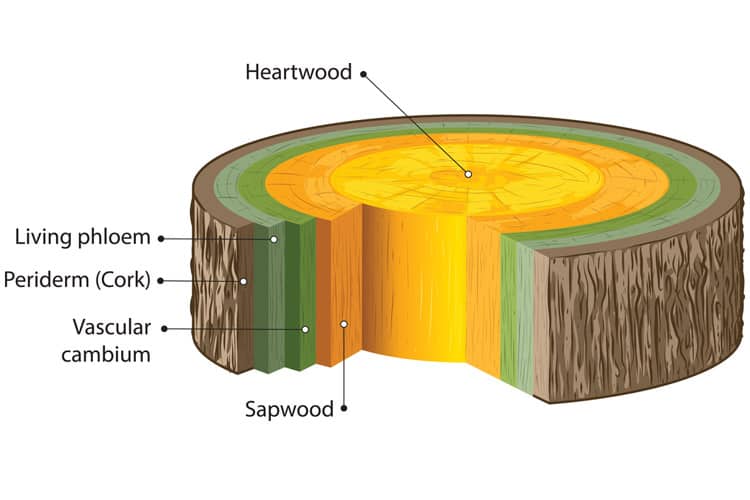 In hemlock, cottonwood, beech, aspens, and all spruces, with a few exceptions, there is not much color difference between the heartwood and sapwood because the color of these species is usually quite light in color.

So, how does the heartwood form? The heartwood is usually what used to be sapwood. As the tree grows, new sapwood forms around the circumference of the tree trunk, which becomes fresh sapwood. The old sapwood dies and becomes heartwood.

In the heartwood, the living cells die and the pores become filled with froth-like substances called “tyloses.” This is what causes the wood to become dark in color in the heartwood region of the log.

The changes from sapwood to heartwood are extremely drastic which is marked by a considerable increase in density, hardness, and weight. It is particularly noticeable in woods like ebony and rosewood. It can be also observed in woods like redwood and black locust.

Usually, the heartwood is more durable and harder than sapwood, and it has better resistance to moisture, insect attack, mold, and fungi. Heartwood is also darker and has a much more distinguished wood grain pattern.

So, heartwood has a more aesthetic value than sapwood. There are a few exceptions, such as yellow pine and certain species of maple where the sapwood finds great use in interior finish and flooring.

Heartwood typically has a higher degree of water resistance, so we use it for tight cooperage. We also use it for tanks and conduits.

Another useful feature of heartwood is that we get certain substances like dyes and tannins that are rarely present in the sapwood.

Let us try to understand more about sapwood and heartwood to make a more specific differentiation.

Transition from Sapwood to Heartwood

When a tree starts to grow, the growing part of the wood is the sapwood. You will find sapwood just below the bark and it is a thin layer of live cells that is botanically known as “cambium.”

The extent of growth in each layer depends on the growing circumstances. In a good year, the growth rate will be more, and in a bad year, it will be less. The result is that growth rings occur of varying thicknesses according to whether it was a good growing year or not.

As the new layers of dead cells start forming inside, sapwood starts growing outwards. This is how sapwood continues to grow.

The Function of Sapwood

If you see a tree trunk in a cross-section, you will notice two parts of the tree’s xylem (conducting tissue). It differentiates the sapwood from the heartwood. If you cut lumber from sapwood, you have to dry it quite thoroughly before you can use it.

The extra care is because the sapwood is more prone to fungus and rot. But with heartwood, you get the required mechanical strength for the tree. The heartwood is also more durable in a variety of ways. As the cells of sapwood die, they become heartwood

Although the heartwood consists of dead tree cells, it will not decay as readily as sapwood. It provides mechanical strength to the tree.

Sapwood has a very limited application as we mentioned above about its susceptibility to moisture, fungus, insect attack, and rot. It is also the softer part of the tree, and it lacks the mechanical strength of heartwood.

As the tree grows and its trunk increases in girth, the heartwood develops. It takes several years for the heartwood to grow. The tree gets heavier and heavier. It can weigh several tons on maturity. The need for this structural support is met by the developing heartwood.

Heartwood secretes resins and chemical compounds which we call “extractives.” It is the extractives that give heartwood its distinctive color. The color might be dark brown like walnut, reddish-brown like black cherry, or even jet-black like ebony.

All these characteristic colors of the heartwood come from the chemicals present in this part of the tree. We prize heartwood not only because of its color but also due to its durability and mechanical strength.

There can be some variations in the heartwood if the wood gets injured or infected by fungus. Then again, you have the heartwood of some types of inherently light-colored wood.

So, light-coloring can occur in heartwood, but it is more of an exception than a rule. The heartwood is the prized part of the log in any lumber you may encounter. The heartwood finally gets processed into the lumber that we use for construction, furniture making, and so many other woodworking applications.

Now that you have some extra insight into the difference between sapwood and heartwood, you can probably use either part of the tree trunk in your woodworking projects.

There is a misconception that sapwood does not have much use at all, and it is only the heartwood that has any benefit in woodworking. However, as you have seen here, sapwood too can be used for several applications.

You can use it for flooring or lining interior parts of walls and wooden cladding. Although you need to process sapwood with extra care, you can use it for limited applications if done properly.

Heartwood, however, is the universal part of the tree trunk that we can use in various woodworking projects. So, next time you get a piece of sapwood, don’t discard it. With the right approach, you can probably make a good woodworking project out of that as well.