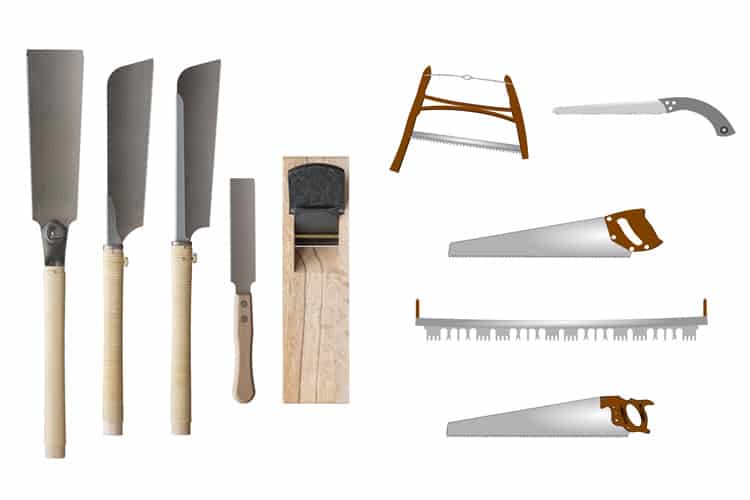 When we compare Japanese vs western saws, you will see that each type of saw is unique in its own way. There is a consensus that Japanese saws are more precise than their western counterpart. But each type has its own set of advantages and disadvantages. You may commonly see both types of saws used in a western woodworking workshop.

Japanese woodworkers tend to group themselves into four categories. The first group works on well-known shrines and temples. The second group restricts itself to residences and consists of commercial carpenters. Then, there are furniture makers, and finally, woodworkers who specialize in interior work.

You will often see an overlap between these two groups. For example, you may find furniture makers working in temples. Those who work on shrines and temples will often occupy themselves with interior décor.

One of the most energy-consuming tools in both Japanese and western styles of woodworking is the hand saw. While the western-style tools include power saws, the Japanese saws are almost always hand saws.

Compared to Japanese saws, there is a much wider variety of western hand saws. Each saw performs specific functions. For example, we use a crosscut saw to slice timber across the grain. Then the keyhole saw has a removable blade and we use it to cut holes in surfaces.

Pulling while cutting in the Japanese style is beneficial in many ways. The main advantage is that you can use a thinner blade resulting in a more efficient and precise cut with a narrower kerf.

You have to exert a lot of force and tend to lean towards the cutting direction with western saws. With Japanese saws, you can lean backward and the force you need to exert is considerably less.

Another downside of western saws vs Japanese saws is that the blade tends to bow, jam, or bend. Because of the pulling direction of a Japanese saw, you will never face such an issue.

As we mentioned above, the main difference between Japanese and Western saws is the cutting direction. Save a few exceptions, all western-style saws cut by pushing them forward.

Japanese saws, however, cut by pulling the blade towards the operator. So, while western saws remove material in the push stroke, Japanese saws remove it with the pull stroke. Interestingly, Japanese hand planes also work on the same principle.

The handles define the required grip for each respective type of saw. The Japanese ryoba saw, for example, is an extension of its blade. It looks like a sword and you hold it like one, preferably with both hands which helps in stabilizing the cutting technique. The handles of Japanese saws come with rattan wound around them for a better grip.

Most western saws on the other hand have a heavy wooden handle that mostly resembles a gunstock. You also grip the saw as you would grip the butt of a firearm.

Because of the cutting action of a Japanese saw, you get thinner blades. It results in a significantly thinner kerf than you get from a conventional western hand saw. There is less chance of jamming, bending, or bowing with a Japanese saw as compared to the western type.

You can also get notably thinner blades with western saws as well. But the blade would be typically reinforced by a brass backing rib for additional reinforcement. A classic example of this type of backing can be seen in tenon and dovetail saws. This arrangement is ideal if you need a 90° cutting angle.

The Japanese saw or nokogiri has an extremely thin blade and cuts as you pull it towards yourself. Two of the commonest types of Japanese saws are the Dozuki and Ryoba.

The Dozuki’s blade is the thinnest that you can get in Japanese saws. It features cutting teeth on one side. The other side has a reinforcement backing strip which gives the blade its rigidity. The Dozuki serves best for use in fine joinery.

The Ryoba is also rather thin-bladed but a two-sided saw. One side has teeth for cutting while the other side serves the purpose of ripping. You can best use this saw to make surface cuts and to saw off wooden plugs while making screw holes and also for general purpose cutting.

The teeth of most Japanese saws have three cutting edges except for the rip tooth saw which has two. The Japanese saw provides a faster, smoother, straighter, and yet cleaner cut. 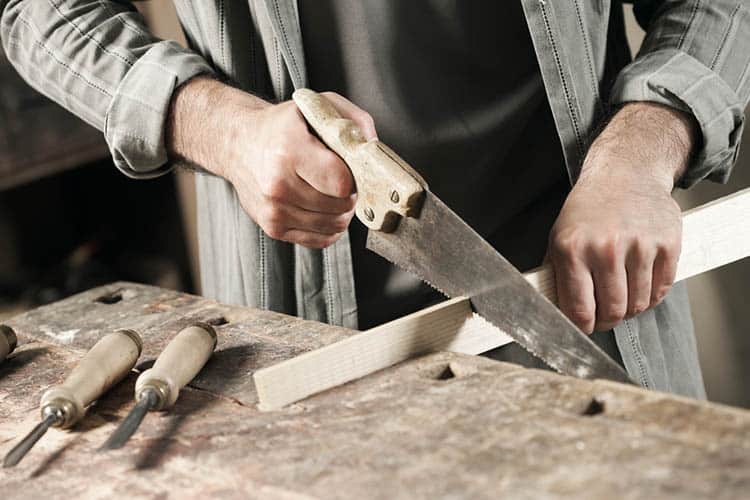 Although we are familiar with most western saws, there are still a few lesser-known types, making the range of western hand saws quite vast. We cut with a western hand saw by pushing it forward, away from us.

Its handles are made of plastic or wood and not bound with any other material as is the case of Japanese saws.

The rip saw and the crosscut saw are the primary types of saws that you may use in the western style of woodworking. A ripping saw cuts in the woodgrain’s direction with a rake of zero to positive.

The teeth per inch (TPI) of a western saw’s blade is lower than that of Japanese saws. The teeth of western saws are so designed that they effectively remove the sawdust from the kerf.

Crosscutting saws on the other hand cut across the grain. This type of saw has a higher TPI, also with a zero to negative rake and a beveled cutting edge.

Now, let’s take a look at the major types of Japanese saws. You can shop for these online or visit a brick-and-mortar shop:

We can best compare the Dozuki to a western backsaw. The name Dozuki in Japanese means “attached trunk.” The name alludes to the stiffening strip on the saw blade.

The Ryoba is a double-edged saw which consists of a ripping blade on one side and a cross-cutting blade.

This type of Japanese saw is a type of modified Ryoba saw, only smaller. You can cut directly on a flat surface with an Azebiki because of its convex profile.

Mawashibiki in Japanese means “turning cut.” So, as you can imagine, we use this saw for cutting in curved lines like the keyhole saw of the West.

The kataba is single-sided with a blade of about 0.5mm thick. It is not as thick as a Dozuki which is 0.3mm thick. We use this saw for general purpose cutting. It imparts a clean and quick cut. The teeth of the kataba are constructed so that you can cut in both ways. It is one of the cheaper varieties of Japanese saws.

The Japanese micro Kataba is a small saw that you can use to make small cuts in a restricted space. It is a backless saw and you can make crosscuts and rips cuts. The handles of such saws are usually beautifully finished. They are made of fine wood frequently inlaid with mother of pearl.

This saw is indispensable to cut holes, cut in curved lines, and other such fine woodwork. The saw blades Japanese keyhole saws are replaceable. The nature of the tasks performed by these saws with slender blades is such that they tend to bend and break from time to time, so the replacement feature is convenient.

The blades of Japanese keyhole saws are usually 0.9mm thick and they leave a 1.3mm-wide.

There is also a wide variety of western hand saws. You may be familiar with most of the ones featured here. But in all probability, you will learn about at least one or two in this list: 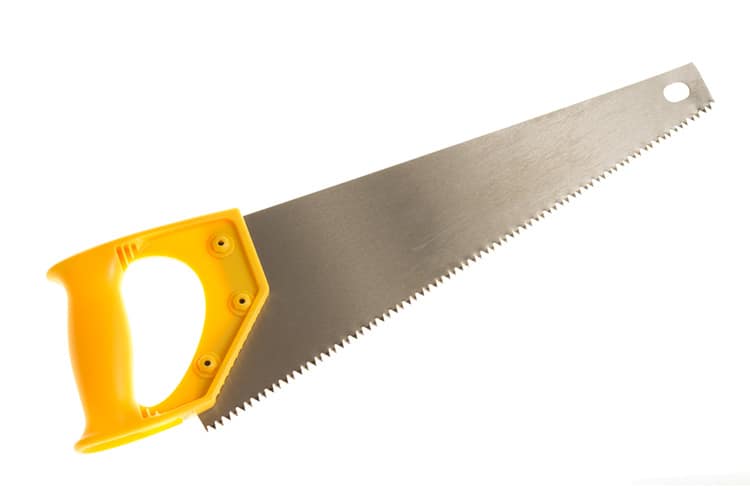 This is the basic saw that you will see in every standard western woodworking toolbox. It has coarse teeth and although the blade of a woodworking hand saw has hard steel it is not hardened. You don’t get a very accurate cut from this saw, so you need to be a bit skilled to cut with it.

The back-saw gets its name from the thick spine on the top of the blade. The purpose of this reinforcement is to provide support to the blade along the line of the cut while cutting. It helps you to gain better control of the cutting action even while cutting thick sections.

It is a bow-shaped saw and has a thin, fragile blade. The fret saw enables us to cut in curves and different shapes. But you can only cut thin wood with this type of saw. The blade of a fret saw is replaceable.

The coping saw helps you to cut lightweight wood in a curved direction. It may not give you as much versatility as you get with a fret saw, but you still get a considerable degree of flexibility. 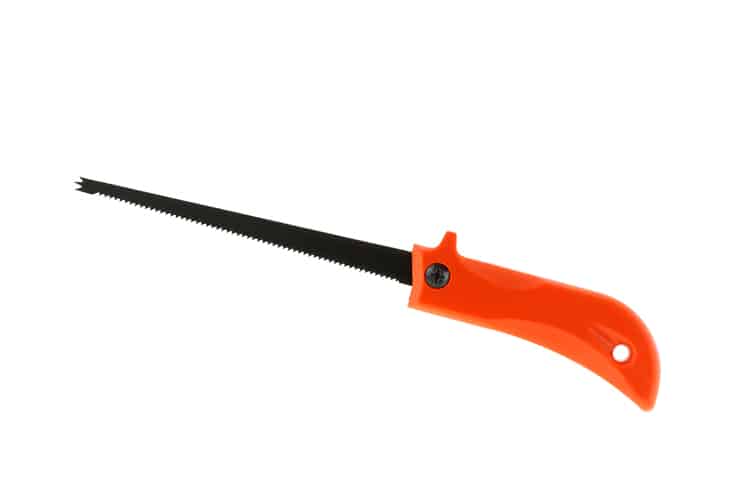 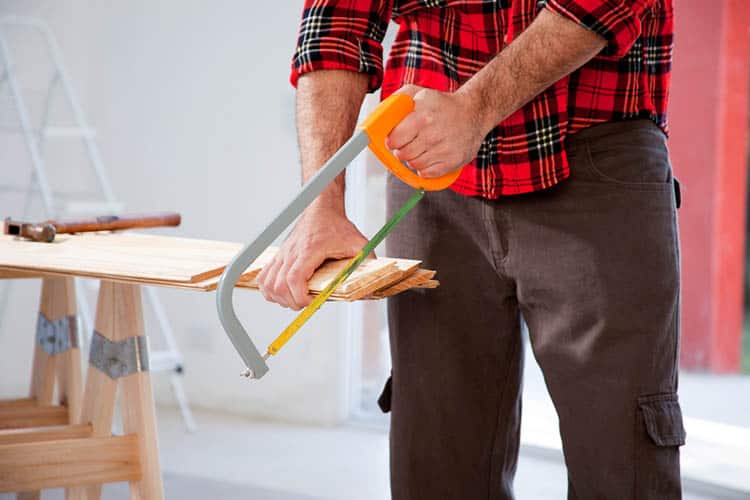 Here is another saw with a bow-shaped frame and removable blade. We normally use a hacksaw for cutting metal. But if you need a smooth, straight cut in wood, you can use this type of saw as well.

The kerf of a hacksaw is very thin but you need to be cut carefully to avoid breaking the blade. Breakages occur frequently with inexperienced operators or if you handle the hacksaw roughly.

The keyhole saw looks somewhat like a sword, with the handle shaped like the butt of a gun. You use a keyhole saw by poking a small hole in thin wood, such as wallboard or false ceilings. Once done, you can easily enlarge the hole into the desired shape. It is very similar to the wallboard saw. Here again, you cannot use this saw to cut thick sections of wood.

In this interesting discussion of Japanese vs western saws, we have tried to cover as many types of saws as possible. You may wonder which type of saw is the best choice.

Well, there is no definite answer to this question. As we discuss the two types of saws, we are comparing two separate types of woodworking. The Japanese style of woodworking is in a class of its own, whereas the western style is more well-known.