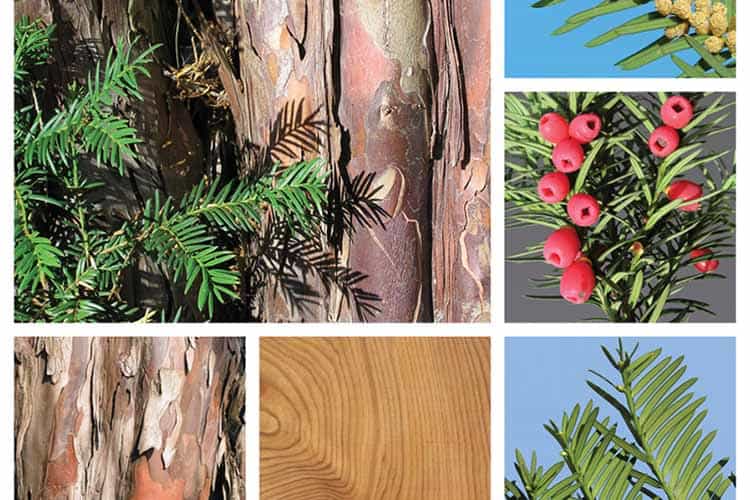 One of the most controversial trees in the history of woodworking is the yew tree. The tree has a long history. The lumber that comes from this tree is also a topic of much discussion in woodworking circles.

Is yew good for woodworking? Yes, yew wood has many useful applications. Despite the belief that it is tainted due to the poisonous nature of its leaves and fruit, this wood serves well for making bows in archery, furniture, cabinets, and veneer. There are many interesting legends from the folklore surrounding the ancient history of this tree. 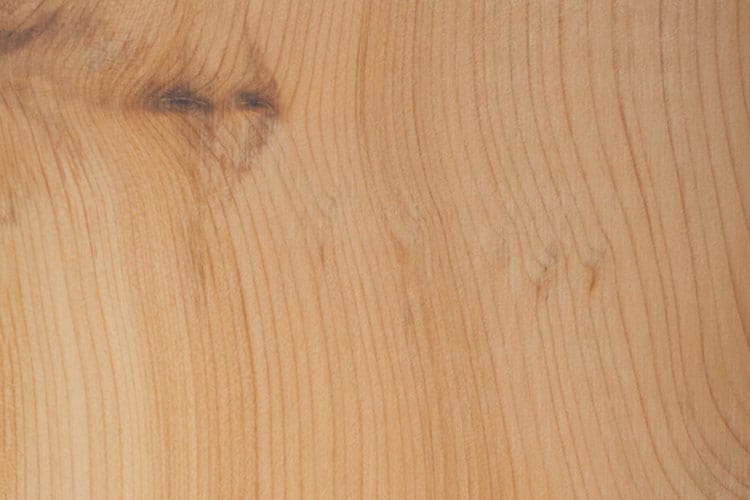 Yew is probably among the hardest in the range of softwood species. It is harder than many hardwoods. Its high density and fine working characteristics are a fine example of a smooth, tight-grained softwood that is also hard, strong, and flexible.

Yew is best-know for its unique mechanical properties. Although it is an extremely strong and dense wood, it possesses a high degree of elasticity. It is this high level of flexibility that makes yew a suitable choice for making bows in archery. And indeed, this wood has been used for weaponry ever since Medieval times.

Other useful properties of yew include its medicinal value. Yew produces alkaloids that come from a class of toxins called taxines. A cancer drug Taxol comes from taxines. Taxines are believed to suppress the growth of cancer cells and prevent them from spreading in the body.

The various parts of the yew tree are highly poisonous. If you visit churches in England, you will notice that almost all the churchyards have at least one yew tree.

The reason behind this seems to be that these trees were planted in ancient times to discourage cattle, horses, sheep, and even children from wandering around the church property. 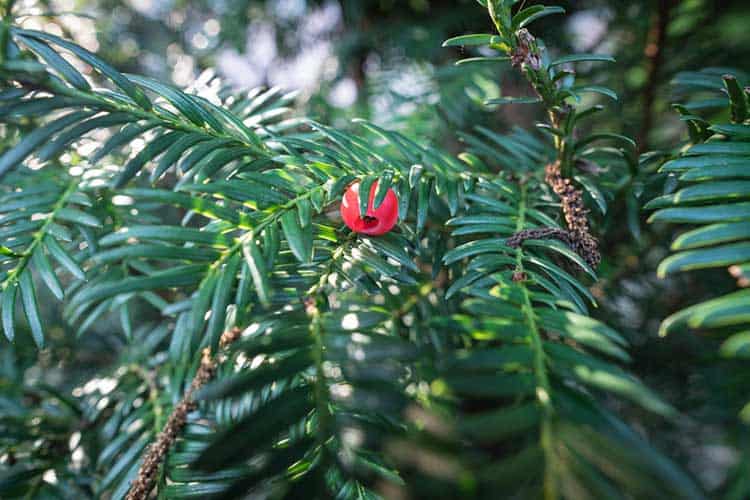 In the central region of Scotland, a yew tree grows that is believed to be the oldest tree in Europe. The estimates on the age of this tree extend from two thousand to three thousand years old. Legend has it that Pontius Pilate played under the branches of the Fortingall yew as a child.

Since the Pre-Christian era, Druids considered the yew tree sacred. The Celtic culture assumed yew trees to symbolize death and resurrection. The tree’s association with death probably stemmed from the poisonous nature of its pines, stems, boughs, and other parts of the tree.

Druids were forbidden to worship inside an enclosed building. They worshipped in the open air and gathered in groves of yew trees that grew on elevated pieces of land. Pagans worshipped yew trees and associated them with fertility and longevity.

In ancient England during the Medieval and Tudor eras, the Longbow was made of yew. It was so named due to its length of six feet. This wood became the popular material for Longbow production.

But the demand far outstripped the demand and soon England had to import yew for making longbows used extensively in the 100-year War. The shortage of yew became so acute that Elizabeth I decreed to replace military longbows with firearms. It is how firearms came into existence in England.

Unlike many wood species, today there are only two primary types of yew – European yew and Pacific yew. Here is a summary of the two types of yew:

The common names for European yew are English yew and common yew. They grow in Europe and Southwest Asia. The trees grow up to 65 feet with tree trunk diameters of up to 6 feet.

We also call this yew species Oregon yew. You will find Pacific yew growing in the Pacific Northwest region of the United States. The trees grow up to 50 feet and the tree trunks grow up to a diameter of 2 feet.

The sapwood of yew is pale yellow or tan and is a very narrow region of the tree trunk. The heartwood is orangish-brown but might be darker with a hint of purple. The wood darkens over time.

Yew wood has a straight wood grain and it has a natural luster with a smooth texture. Another notable characteristic of the wood pattern of yew is the frequent knots and splits which add character to the timber. 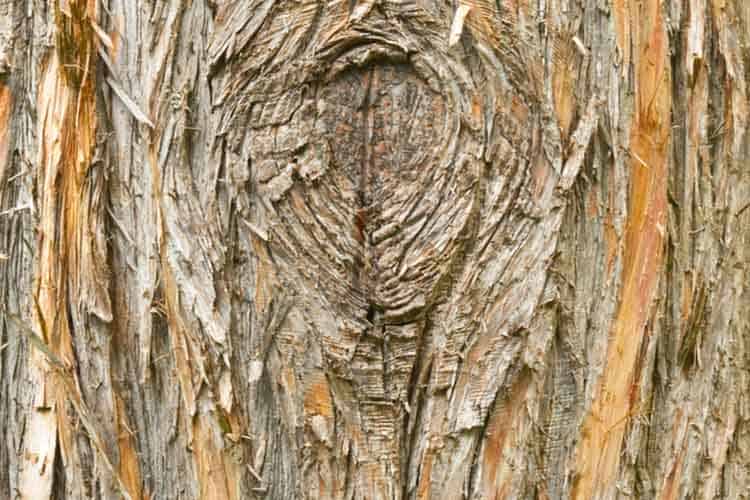 Yew is a durable wood and can rate as very durable. It resists decay and insect attack quite adequately.

You will find this wood easy to work with. However, yew wood contains multiple grain aberrations through knots and splits, you need to handle it carefully. Notwithstanding, you will also find it easy to turn yew, and it takes finish quite well.

We use yew to make quality furniture, carvings, turned objects, musical instruments, and veneer. But the most popular use of yew is to make bows in archery.

You may find it difficult to procure yew. Even with the larger trees, the trunks tend to be hollow. Due to this, even when yew wood becomes available, the sizes are limited, and that manifests in knots and twists.

Due to the above reasons, yew tends to be expensive, although you may get some cheaper sections from time to time.

This tree does not find itself on any of the lists of endangered wood species. 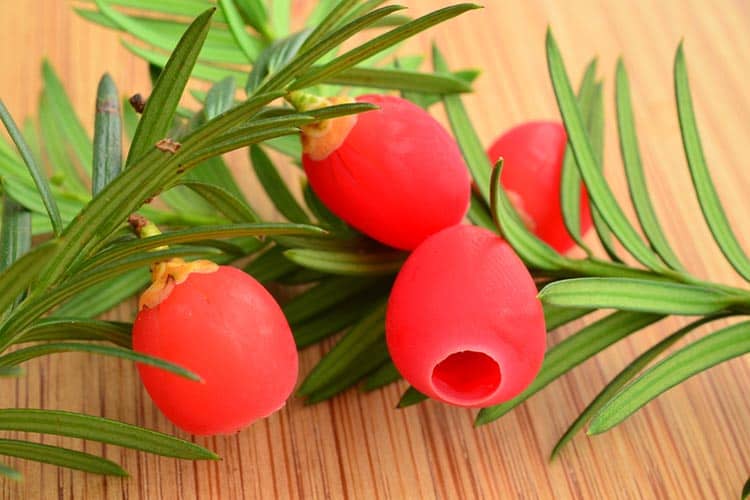 Yew is a type of wood that doesn’t usually come under mainstream woodworking. But we find it a good topic for discussion thanks to its long and ancient history. There is a lot of folklore behind the history of yew trees.

It is also one of the oldest specimens of wood species in the world with trees estimated to be thousands of years old.

When we come to the wood of the yew tree, that also shares a long history. Is yew good for woodworking? Yes, it is! The wood was used to make high-quality bows for bows and arrows to such an extent in England that it exhausted all the trees in the land!

Other than making bows and arrows, yew makes a variety of other wooden items. But the possibility of finding a section of yew lumber is quite slim. If you do, it would possibly be a tiny section that you can use for carving. So, if you do happen to get a chance, use this wood to make something unique for one of your woodworking projects.