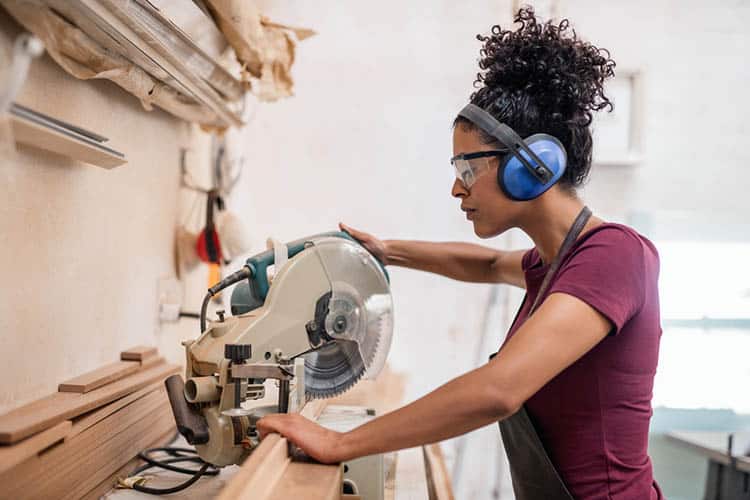 People tend to think of only men as woodworkers in this male-dominated trade. Contrary to popular opinion there are many female woodworkers in existence today. They are as good if not better than male woodworkers and exhibit a high degree of knowledge, skill, experience, and talent.

There are several famous female woodworkers in the United States today who are also musicians, scientists, celebrities, and DIY bloggers. As a woodworker, it is worthwhile to know these dynamic women who have made their mark in the world of woodworking. They are well-known and successful and have numerous woodworking projects to their credit.

Alma Rosa lives in Chicagoland and her place of work is Pink Soul Studios. She had a passion for making furniture, so she began to do it. Pink Soul Studios comes from Alma’s full name, Alma Rosa, which in Spanish means “pink soul.”

Yes, you will find a lot of soul in Alma’s work, in the way she churns out her creations with her iconic CNC.

Alma Rosa’s latest creation is a beautiful record storage cabinet. It is an excellent combination of utility and aesthetic sense.

Brittany Bailey is from North Carolina. She wears many hats such as an artist, graphic designer, general contractor, photographer, and web designer. Brittany has devoted all her efforts to standing out in the crowd and helping novice DIYers as she works.

In her blog, Brittany states that anyone with the will and the passion can become handy if they wish, and become a true DIYer.

Among Brittany’s early creations is a bay window seat featuring a storage compartment. She shares the details of her projects on her blog including the details and step-by-step instructions.

Claire Baldwin began her journey in woodworking with a coffee table that she built for her apartment. She developed a keen interest in fine furniture and gradually became more involved in woodworking furniture projects.

Today, she operates under the brand name Polish and Power Tools. Claire lives in Nashville, Tennessee, and has created countless pieces of furniture and home décor accessories.

Claire feels that people have misconceptions about how a woodworker should be. Woodworking isn’t only about physical strength, she says. It has a lot to do with creativity and the passion to create.

In recent years, Claire Balwin has begun to make forays into storage cabinetry which has met with considerable success.

Jen Woodhouse is another well-known female woodworker but wood is not the only medium that she works with. She is a songwriter, has two children, and is an army wife.

Being a songwriter, it comes as no surprise that Jen Woodhouse comes from Nashville, Tennessee, but today she lives in Kentucky.

Her work is well-known throughout the United States. Jen’s blog features documents with all her designs and projects. Her blog has been recognized as the Best DIY Blog by Domino magazine and HGTV.com featured her projects.

Her creations have also been featured in House Beautiful and Elle Décor. Jen also has a good business head and has partnered with big names like Simpson Strong-Tie and The Home Depot.

Refurbishing furniture is how Ashley Nielson ventured into the world of woodworking. It began as a means for her to spend time with her twin boys. Later on, she started building her furniture in collaboration with a friend. From woodworking, as a hobby, it became a full-time furniture building enterprise.

Ashley’s brand Build Like a Chick is highly recommended across the United States and you can see her creations on Instagram under the hashtag #buildlikeachick.

Ashley is a fan of using DIY to make a home out of a house. She specializes in beautifully crafted tables. Another feature of Ashley’s is that she incorporates metal into the woodwork giving it an interesting twist.

Today, Ashley is a highly-booked woodworker with plenty of orders, mostly through word of mouth.

Molly and her husband Dylan have created their brand Woodbrew. They are more commonly referred to as “Molly & Dylan.” Woodbrew deals in projects that involve both wood and metal among other materials. You can see their creations on YouTube.

She has also created several educational tutorials which have been well-received. Among her best tutorials is one that teaches you to create a miter saw station.

Molly’s brand Woodbrew has come out with several outdoor projects like a DIY planter box and an outdoor coffee table.

A post shared by Sadie | the Awesome Orange 🍊 (@theawesomeorange)

Here we come to the next female woodworker. Sadie Mae John is a person who used to work 60 hours a week for another person. But she realized that there was something more to life than slogging for someone else.

So, Sadie quit her job went home to begin her creations in woodworking. It resulted in the creation of her brand The Awesome Orange. It includes many unique creations in wood that speak of passion and dedication.

Sadie’s motto is “Build loud, build wide.” In her blog, Sadie explains to you how to make drawer boxes easily. She shares her secrets about how she made drawer boxes for her master closet.

April Wilkerson is the proud owner of her blog Wilker Do’s. But what many people do not know is that when she started her blog, April hadn’t used a power tool in her life. She had a passion to create things that she otherwise couldn’t afford for her home.

It took April six years to reach a stage of proficiency in various successful woodworking projects. April’s passion for woodworking is very motivating for other woodworkers.

She works on other materials like metal also and shares her knowledge through online videos on YouTube and her blog. Some of her projects include large woodworking structures like a big staircase, a covered patio, and a queen-size bed.

You can always learn something from Wilker Do’s whether you are a newbie or an expert woodworker.

On her Twitter bio, Ana White writes, “Let’s Build Something!!!” Ana lives in Alaska and makes a variety of wooden furniture and structures.

Ana’s website is Ana White DIY where she shares information with her readers for free. You can find all the details in her public catalog. Some of Ana’s designs are state-of-the-art but quite doable for even a novice woodworker, whether it is a sofa, table, or shelf that you want to make.

Ana also provides several good tips on how to save money through DIY. She has helped to build a sizeable community of female woodworkers who draw inspiration from her knowledge and passion for the art of woodworking.

Anika Gandhi lives in California and her specialty is simple home improvement projects. She feels that if she can do it, so can you. Anika is a qualified electrical engineer and physicist. She quit her job as a full-time engineer to spend more time with her children.

After moving with her family to a new location also in California, she created her blog Anika DIY Life. In a bid to record her knowledge and ideas, Anika has built some impressive side tables and nightstands. She even created an end table featuring a hidden charging station.

All Anika’s projects point to creations based on a combination of utility and smart, sleek designs.

Let’s hear it for the women! Yay!

These ladies have proved their mettle in wood (pun intended!) If you are a woman who gets inspired with wood, why not venture into the exciting world of woodworking? You can start small and add on as you go along.

The beauty of woodworking is that you can start with just a handful of tools and a small space in your home. As you get the knack of how it’s done, you can gradually increase the scale of your projects.

Give it time and a bit of tender, loving care. With the inspiration of the famous female woodworkers mentioned here and watch your woodworking projects grow from strength to strength.