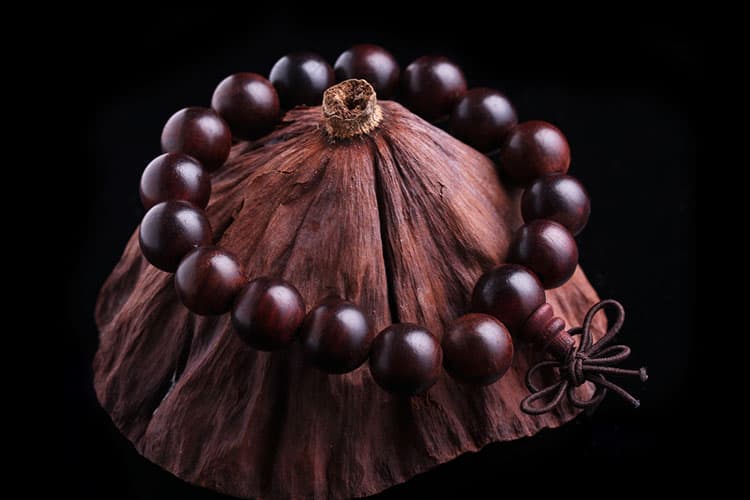 When you look for rare woods, zitan wood is a type of wood that comes to mind. This is an almost mythical wood in that you hear about it but rarely get to see it. Today zitan wood is heard of but rarely seen. 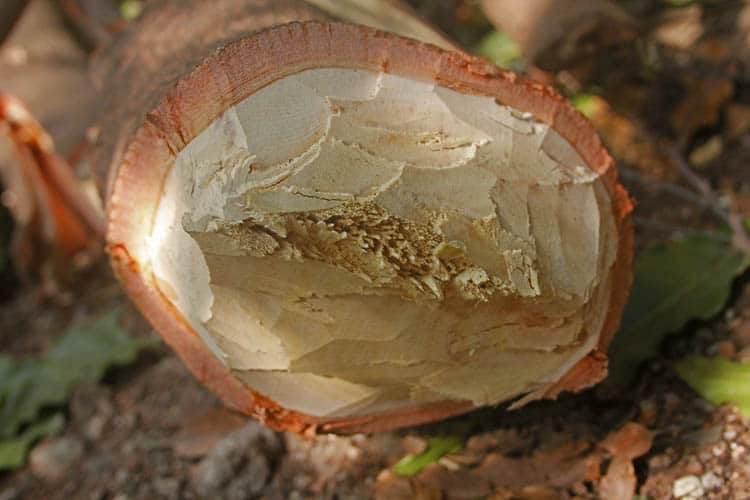 The botanical name for zitan is Pterocarpus santalinus. Other names for it is red sanders, yerra chandanam, and rakta chandana. It is native to the Eastern Ghats of South India. The wood is known for its rich, red color. It is a member of the rosewood family.

Red sanders is often confused with aromatic Indian sandalwood (Santalum album) but the two species bear no relationship with each other. Red sanders grows only in warm tropical climes and has no resistance to cold – it will die if temperatures reach less than 1°c.

Zitan is an evergreen tree with excruciatingly-slow growth. It takes 300 years to reach a height of 30 feet with a tree trunk of 10 inches in diameter. The slow growth rate of this tree highly limits the availability of the wood it yields.

Zitan is further divided into two subdivisions – da-yie-tan and xiao-yie-tan. Although da-yie-tan has started appearing in some parts of tropical rainforests, xiao-yie-tan only grows in India but is extremely rare.

The growth rings of the zitan tree are so close that you need a magnifying glass to see them. The woodgrain pattern is unremarkable, but the deep red-to-purple-almost-black color makes up for the lack of grain patterns.

The woodgrain pattern of zitan is such that you don’t need to apply decorative, colored lacquer to the wood. Because of the slow growth of zitan trees, the wood has always been in short supply and today is as good as extinct. You will only find zitan furniture in museums and private collections.

The red, purplish color of this wood was coveted in ancient times in China and Indo-China and along the coast of India. It grew in the Hainan province in China and was in high demand by Chinese furniture collectors of that time. But the necessity of transporting this wood from remote locations made it an expensive type of wood.

One of the unique properties of zitan wood is its high density to the extent that it will not float in water but sinks to the bottom. Its rich, dark color and high density make it a great wood to use for carving. These properties make the color of zitan wood for use in royal families of the Qing Dynasty. Between the 17th and 19th centuries, only imperial households used this wood.

The Chinese valued zitan wood for furniture making from the 3rd century. Since ancient times in China furniture was popularly made from huanghuali (Chinese rosewood) and zitan.

Huanghuali was more common because it was more readily available. Chinese furniture makers considered zitan more valuable because it was so rare. It was during the Ming and Qing periods that American and European travelers visited China.

These travelers brought back intricate pieces of zitan furniture which introduced this class of furniture to the rest of the world. Some of the methods used to procure these rare pieces seem questionable, as many of them that appeared in auctions have been listed as missing in Chinese history books!

Zitan Chinese furniture exhibits a high quality of wood and beautiful, rich colors. Chinese furniture also commands great respect in the woodworking world because no nails, screws, or glue is used to assemble the wood, including zitan.

Today, many beautiful pieces of zitan Chinese furniture appear on the market and they sell for astronomical prices at auctions.

Zitan wood is a major black market item for smugglers in India because of its lucrative market in China. Exporting zitan wood is illegal in India and the Indian authorities apprehend countless smugglers every year.

After an interesting discussion on the history and background of this unique wood, let’s take a closer look at the various features of Zitan:

Zitan wood has a dark heartwood that ranges from dark orange to reddish-purple. You will see darker streaks aligned uniformly along the planks of this wood.

The already dark color darkens even more over time until it becomes an almost-black purple. The color of this wood strongly resembles another exotic rosewood species, Bois de rose.

Although the growth rings are so thin that they are almost invisible, there is a clear demarcation between the light sapwood and darker heartwood. The woodgrain pattern is straight and occasionally wavy. It has a high natural luster with a medium, uniform texture.

The primary use for zitan wood is to make fine furniture and carvings. It is specifically used for making the bridge and neck of the shamisen, a Japanese musical instrument.

The hype behind this wood has reached ridiculous heights. Smugglers are ready to use force and even kill or be killed to procure or sell this rare lumber. Under such circumstances, you are not likely to lay your hands on any of this wood.

Zitan antique Chinese furniture is a coveted commodity that sells for hundreds of thousands of dollars at international auction houses like Christie’s. Other than fine furniture, zitan makes exquisite sculptures.

The zitan tree also yields extracts for herbal remedies for treating several ailments for pain and digestive disorders and it is also believed to act as an aphrodisiac.

Need we say more than state that zitan is highly-priced and hardly available? The primary usage of this wood is within China where it commands exorbitantly-high prices. The price of zitan wood or its products is higher than any other precious hardwoods worldwide.

Regarding availability, you can still procure zitan wood thanks to widespread smuggling into China despite strict trade restrictions. Furthermore, there is considerable activity taking place regarding the development of plantation sources.

But if you get wood that a seller claims to be zitan, first, it is most likely to have been illegally sourced. Or, it might be counterfeit zitan because there’s much going around. Rather than be fixated on this particular wood which is next to impossible to procure, you could try some rosewood alternatives instead. 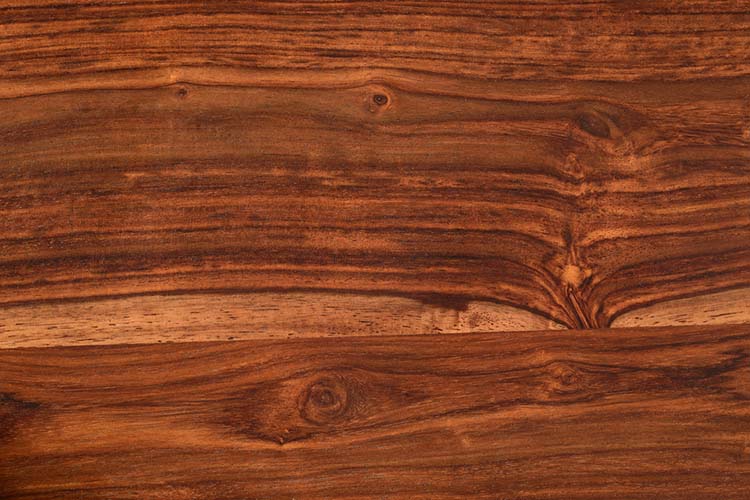 Zitan features on both the IUCN Red List and the CITES Appendix II. We consider this wood endangered, with more than 50% of its population reduced over three generations due to relentless exploitation. 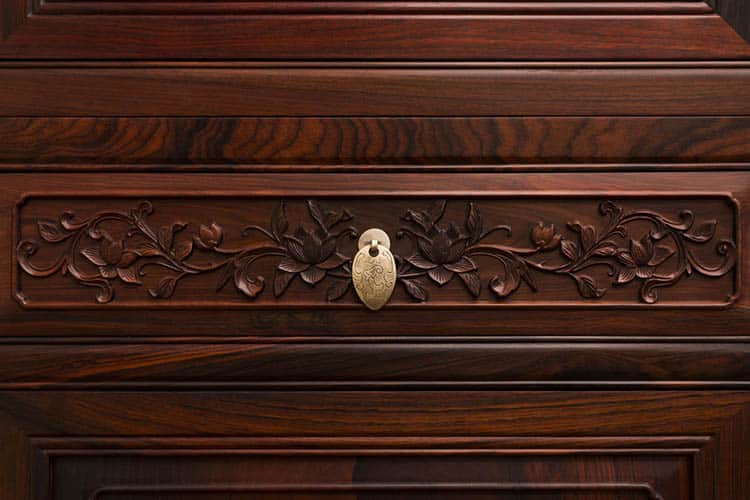 Zitan wood is one of the rarest forms of wood you can find (when you can find it!) It has a rich, ancient past with tales of plunder and the greed of men to tell. Many lives have been lost in the pursuit of this rare wood.

You aren’t likely to procure any of this wood in its raw form. The only chance you may have is through reclaimed wood from antique furniture and old structures. Zitan wood was always and remains the wood of the rich.

But as a woodworker, you will find facts about this wood like what we have discussed quite intriguing. With a bit of experience and application of knowledge like the information in this post, you can accurately identify genuine zitan wood and appreciate its beauty.