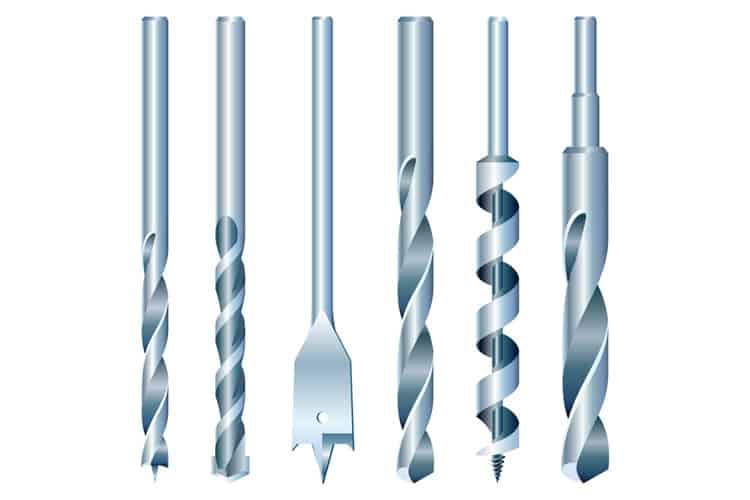 Woodworkers face multiple options for using drill bits. We use drill bits on various materials like wood, metal, and plastic. Among the numerous types of drill bits, you can get, the auger and spade bit are two popular options.

The auger bit vs spade bit is an interesting topic for discussion. While there are several choices for putting a hole in various materials, the auger and spade bit are two popular choices. Although similar in function, these two drilling accessories perform specific functions. While the spade bit is a cheaper option, the auger bit creates a cleaner hole. 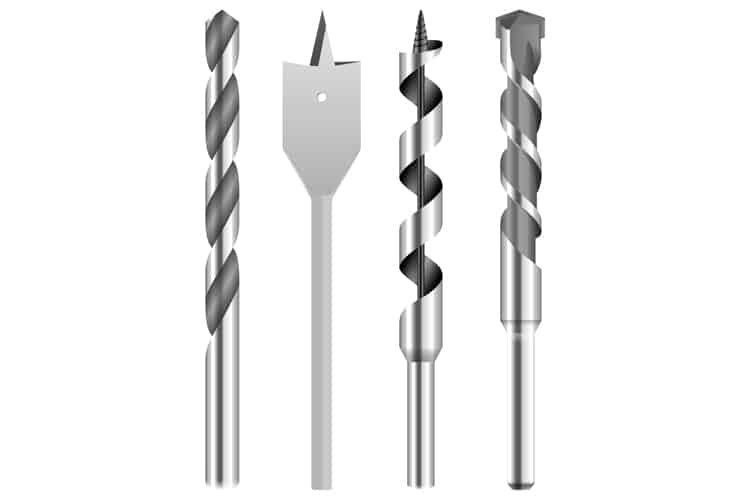 The woodworkers and craftsmen of today have a lot of options when it comes to drilling bits. Manufacturers make bits from different materials for different types of boring. The efficiency of the drill improves if you use the right drill bit. They use metal to make bits; only the composition differs.

There are twenty to twenty-five different types of drill bits. The Auger Bit and the Spade Bit are two of them

Spade bits are drill bits we use for boring wood. The spade is flat and has two sharp lips. It was invented in 1968. We use it to scoop material out of a borehole. It is used more in the United States than in the United Kingdom.

The auger is similar to a regular twist drill. But if you look closer, you will see some unique features. Comparing auger bits vs spade bits can be somewhat confusing. To get a better understanding of these two tools, you should consider each one separately.

A Brief History of The Drill 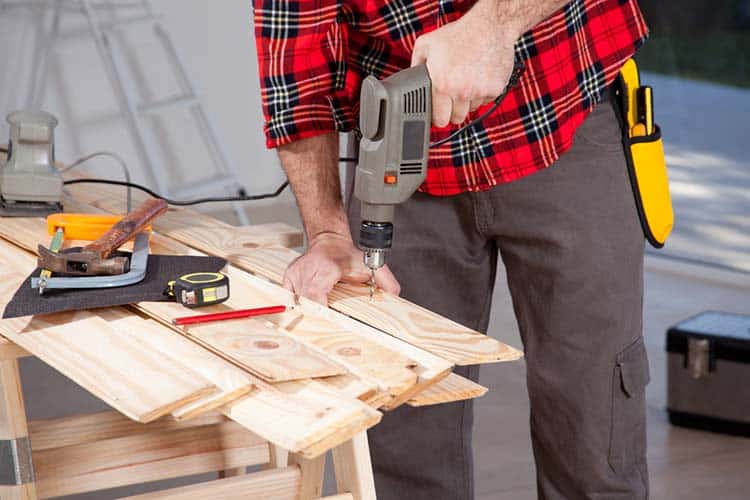 The history of the drill is a very long one. People of old understood the importance of rotary tools in their everyday lives. They bored holes by spinning a sharp rock between their hands until they got the desired hole. Then they made the hand drill. They attached a small stick to a flint point and rubbed it between their hands.

Humankind invented the first drill, the bow drill, which dates back to the Egyptians and the Harappans. This later evolved into the drill press. In time, people used various power resources like windmills, water wheels, and human strength. They used belts to aid drilling.

A bit later, they used the auger for drilling purposes. The first auger drill bit designed and used was in ancient Rome, in 250 B.C. The Electric Drill

Two Australians, Arthur James Arnot, and William Blanch Brian put forth the idea behind the electric drill. They patented their idea in 1889 and created the common electric drill. It made a big difference to the people using manual drills because it saved time and energy.

Wilhelm and Carl Fein, two Germans, introduced the first portable electric drill in1895. They designed it to fit into the user’s hands.

In 1961, the same duo, Black and Decker, made the cordless drill. This set a benchmark for modern-day drills. Black and Decker remains a popular brand of electric drill renowned across the world. 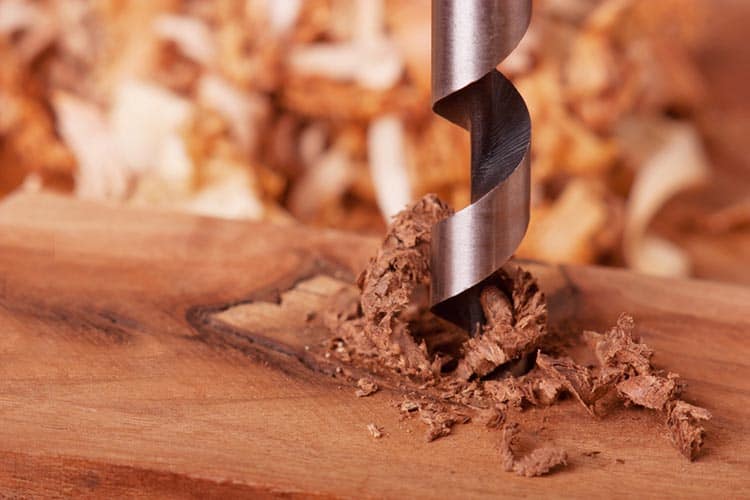 The auger bit resembles a standard twist drill. But it has a few unique characteristics that distinguish it from other wood drilling accessories. Auger bits are considerably larger in circumference and longer as well.

Auger bits have a single-spur cutting edge. It enables you to easily drill clean holes in wood that is dry and dense. The corkscrew-like tip of these bits provides a lead hole, reducing the need for adding excessive force while drilling.

The fluting on an auger bit is exceptionally wide. This feature helps to remove the wood chips effectively while the tool is in operation.

Generally, an auger bit has a hexagonal shank rather than the round shank of most other drills. The purpose of the hexagonal shape is to provide a better grip between the bit and the drill machine, improving the torque translation rate.

You find the auger drill bits in just about any size you can imagine. From a fair-sized handheld unit to units that you tow behind a tractor. You differentiate Auger drill bits according to their diameters. These bits come mostly in diameters that range from 4 inches to 18 inches. 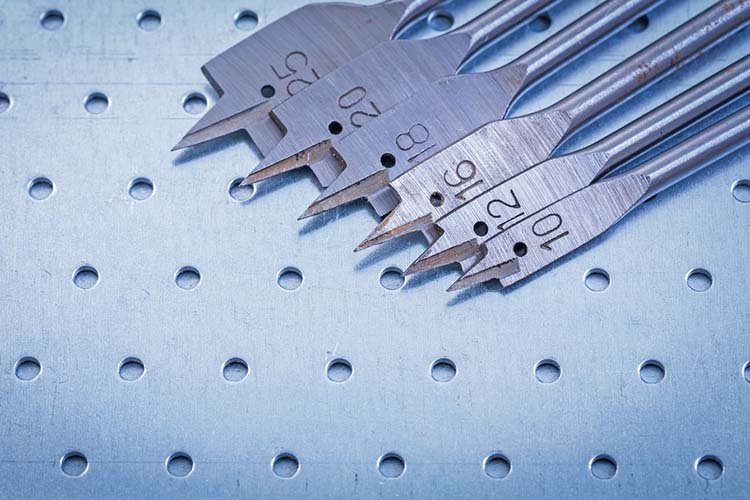 Another name for spade bit is “paddle bit” due to its paddle-like appearance. You can easily identify a spade bit due to its characteristic square, flat head. The head has a shape that you can make a hole that matches its width. You will find these bits easy to use due to the brad point on the head.

You tend to get rougher bores with a spade bit. The reason for the rough finish is that the flat sides of the bit do not cut into the material very cleanly. However, if you need to bore a shallow hole, you normally won’t find this much of an issue.

But you need to proceed with caution with spade bits because there is always the risk of the wood splintering.

So, you should know the differences between auger bits and spade bits. Let’s delve more deeply into the nuances of the two different types of drill bits:

The most distinguishing feature between the auger bit vs spade bit is the shape of the head. The spade bit as the name indicates has a profile that resembles a spade. It has three points on the tip of the head. Two points on the other edges of the tip are for cutting and the central point is the brad which centers the bit.

An auger bit has a small corkscrew-shaped point. It kind of pulls the bit into the wood to make a deep cut. This drill bit has a long, fluted body. Once the initial cut is made, the fluted surface drives into the hole. This part of the auger bit serves the dual purpose of cutting the hole and removing the excess material.

There is a considerable difference between the depth to which auger bits and spade bits bore into wood. An auger bit will give you the deepest hole – you can get hole depths of 15 to 20 inches even in hardwood. In contrast, you need to use a spade for drilling shallower holes.

Here again, there are significant differences between the finishes of both these types of drill bits The structure of each type of drill bit determines the smoothness of finish that you can get.

Spade bits will give you rougher bores. The flat head of the spade bit somewhat impairs its capacity to push out the excess material, resulting in a relatively rougher finish.

The auger bit yields a cleaner bore than a spade bit. The fluted structure of the bit cuts cleanly into the inner surface of the bore with its sharp cutting edges. Then the spiral-shaped fluting helps to remove the debris, resulting in a cleaner hole.

Typically, you get auger bits as single units, making them a more expensive option. The saving grace of auger bits is that they are more resilient and durable, so in the long run, the costs of both these types of drill bits get balanced out

Auger Bit vs Spade Bit: Which One to Use?

Now that you know the basic differences between auger bits and spade bits, you need to consider when to use which type.

Next, consider the diameter of the hole you want to drill. A spade bit is good for boring wider holes. Auger bits that provide wider diameter holes tend to be considerably more expensive. So, it makes more sense to use spade bits for bigger holes.

You may also find it convenient to start a smaller hole with an auger bit and then make the final hole of a bigger diameter with a spade bit. This is why you will often see a combination of auger and spade drill bits in many woodworkers’ toolkits.

If a woodworker needs to drill holes, there are many options available. You may have to choose between different types of drill bits for different materials and thicknesses. Choosing an appropriate drill bit can prove to be quite confusing.

Even if you have to choose between an auger bit and a spade bit, you could be rather unsure. But now, with the information we have provided here, you can make the right choice.

Knowing the advantages and drawbacks of these two types of drill bits will enable you to make the right choice and get the best out of each one. So, next time you need to use an auger bit or spade bit, you can select the right one with confidence.